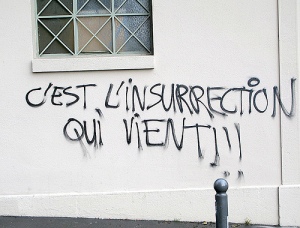 “Revolutionary movements do not spread by contamination but by resonance. Something that is constituted here resonates within the shock wave emitted by something constituted over there. A body that resonates does so according to its own mode. An insurrection is not like a plague or a forest fire – a linear process which spreads from place to place after an initial spark. It rather takes the shape of a music, whose focal points, though dispersed in time and space, succeed in imposing the rhythm of their own vibrations, always taking on more density. To the point that any return to normal is no longer desirable or even imaginable”.

Number 54 In this issue: Mobilising against the assault on nature X-axis: the money behind the greenwash With friends like these… Neoliberalism is the new fascism George Orwell: an orgrad inspiration Acorninfo 1.  Mobilising against the assault on nature The much-vaunted “green” agenda of the World Economic Forum (WEF) is coming under attack as its […]

Number 53 In this issue: Seeing through “democracy” Greta Thunberg: the billionaires’ favourite Misdirected Rebellion Calling out the imperial gatekeepers Yellow revolt takes a striking twist Jacques Ellul: an orgrad inspiration Acorninfo 1.  Seeing through “democracy” The capitalist system will not abolish itself. In fact, it will always do all that it physically can to […]